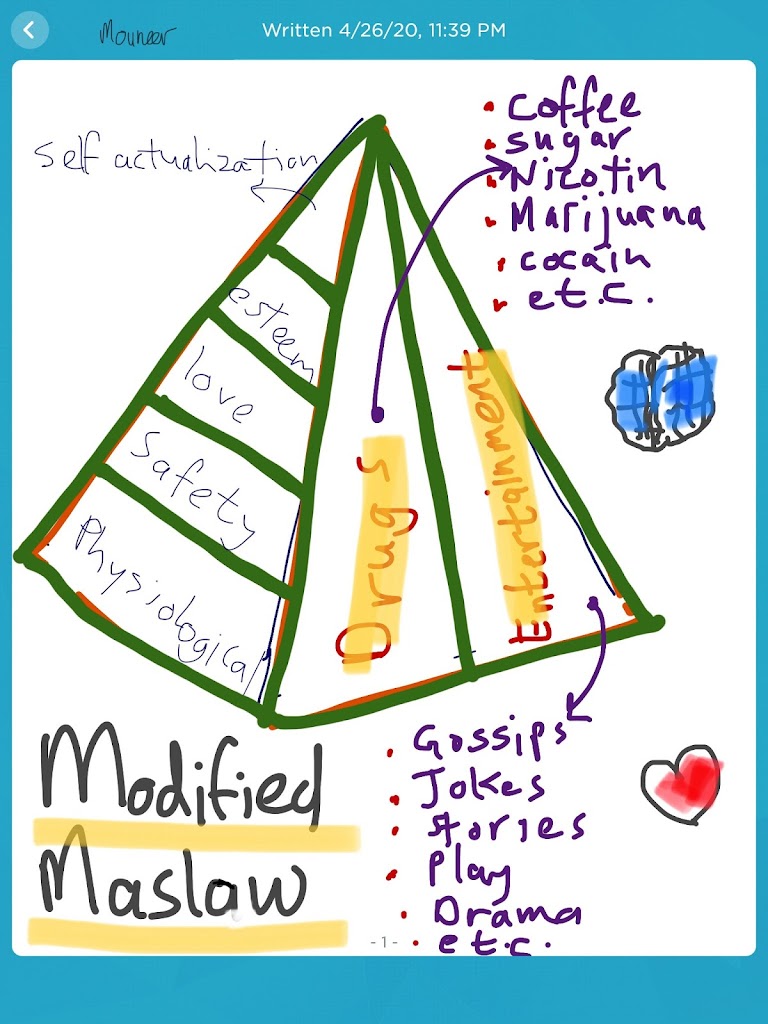 (find Arabic version here)
This is the famous Maslow hierarchy of needs that shows how we humans won’t think of higher level needs unless lower levels are satisfied.

I had the idea that there are a set of parallel needs that stick with us no matter where we are on Maslow’s hierarchy.

These are:
-mind state modifiers – physical – cravings
-mind state modifiers – psychological – entertainment
The first need is our tendency to create and satisfy a habit of neurochemical   state of our mind da through consumption of some material; this can range from purified sugar in different formats, soft drinks mx chocolate, coffee, tea, smoking nicotine and up all the way to co ain, amphetamines and others; alcohols and the likes; psych drugs; hallucinogens, sedatives and more. I see this as an intrinsic human need.
The second are the mind state modifiers that don’t enter our bodies but are sensed; this stems from “stories” that come in the form of gossiping, telling of dramatic stories and news, stories of struggle, shame and scandals  of imaginary fiction of beats and god, time travel and space; this also come j. the form of seeing competition and conflicts: slaves forced to fight lions and each other’s to death to football and boxing matches;
this is the second human needs that is with us no matter which level of needs we are at.


Good. now what to do with this?
Like any model of human behavior, they should help one be aware of human weaknesses and awareness is first step in avoiding pitfalls. These two needs are becoming more easy to succumb to in our current times; easy cheap dopamine is everywhere, little piece of desert, a sugary snack, one episode of this show or perhaps the whole season, and the list go on.
Via Negativa essay shows a practical way of what to do. here is the link https://tldrarabiccontents.blogspot.com/2020/02/via-negativa.html